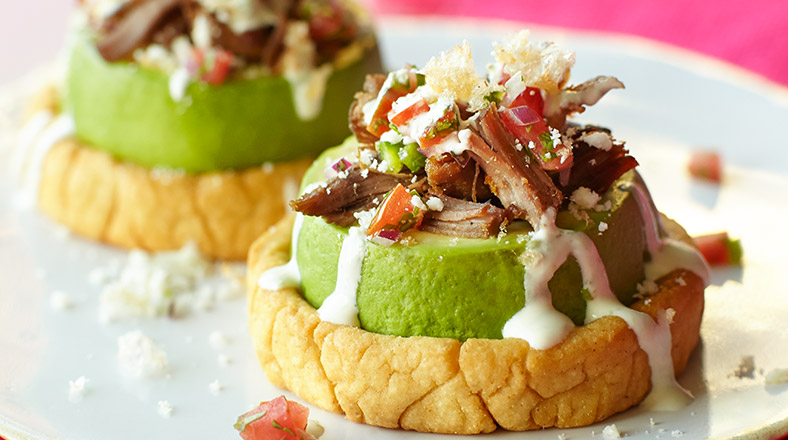 Sope is a tipical Mexican Food. Here at our Mexican restaurant in Santa Rosa, we serve this delicious typical mexican dish.

Sope (pronounced as soh-peh) is a traditional Mexican food. It is ideally a thick tortilla with various toppings, such as re-fried beans, cheese, tomato or chili salsa, cabbage, and sour cream. Meat, such as chicken, beef, or pork is also added for variety. The sope is soft and thick, with a fried exterior. It is usually the size of a fist. These are quite popular in Mexico and found in almost every food stall and  Mexican restaurant. These are, however, mostly unknown outside Mexico.

The Culiacan city in North West Mexico is the origin of sopes. It is believed to have been in existence over a very long time, although the exact timeline is unknown.

It is usually prepared in the following way:

·         It is then flattened into a thick round shape and the sides are pressed to form a ridge to prevent the toppings from slipping off.

The sopes are served as soon as they are made. They can be served as an appetizer, but can ideally be had as a main dish for lunch or dinner as it contains several toppings. Come to our Mexican restaurant La Palapa in Santa Rosa to try out this delicious dish.

There are several regional variations of sopes made in Mexico. The variations are generally due to the different topping used in each region, including the locally popular salsa.

Apart from these variations, there are several dishes in Mexico that look similar to the sopes. Gorditas, tlacoyos, pellizcadas, salbutes, garnachas, huaraches, and memela are some of them. Huaraches is a sandal-shaped corn pastry with meat being the predominant topping. Tlacoyos is also a corn pastry, but was originally eaten without topping. Garnachas are also corn tortillas topped with a Mexican cheese and salsa.

A meatless sope can contain approximately:

Corn, with which the sopes is made, is rich in nutrition. It contains phosphorus, folate, thiamin, vitamin C, and magnesium. Phosphorus helps with storing and transporting energy, while folate aids with cell function and tissue growth. Vitamin C provides immunity and aids in iron absorption. However, as the sopes are deep fried, it can be high in fat content and cholesterol, which is not healthy for the heart.

The health factor of the sopes can be largely influenced by the toppings used. Lettuce and beans contain vitamins and meat contains protein. Low-fat cheese can be used, which is also rich in calcium. The pastry can also be baked instead of being deep fried, but taste may have to be compromised with, however.

Would you like to try out the sopes?  At our Mexican restaurant in Santa Rosa we will be happy to serve you some delicious ones.